I have been to Bosnia-Herzegovina only once, in 2004, as the director of a university travel program.  I went reluctantly.  An estimated 100,000 soldiers and civilians had died in the war that ended in 1995, and Bosnians faced seemingly insurmountable obstacles to emotional recovery, political stability, and economic redevelopment.  I dismissed as naïve my hopes for a renewed, multi-ethnic Bosnia, reconciling Serbs, Croats, Bosniaks, and other ethnic minorities.  I envisioned Bosnia “war-torn,” its people dispirited, its slaughter and pain unspeakable.  Worse, I expected nothing of the soothing hospitality, culinary savor, artistic depth, and convulsive laughter that accompanied every phase of the trip.  Mercifully, Bosnia corrected me.

Since then I have searched for images that portray Bosnia’s striking beauty, horrific decimation, and enduring vitality.  When I found Biscevic (born in Sarajevo in 1963), I was transfixed.  In the haunting edifices of “Sarajevo,” the shrapnel heat of “Life and Destruction,” and the contemplative fermata of “The Path,” I rediscovered Bosnia. 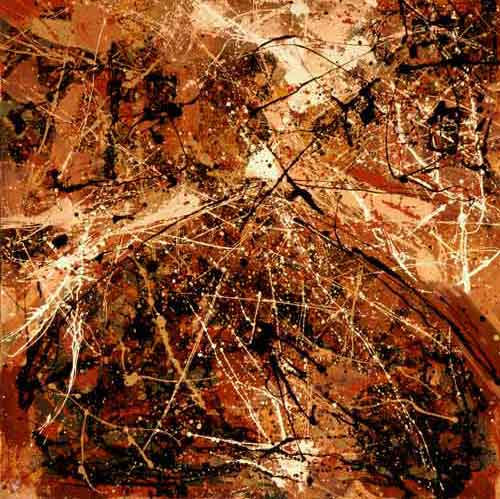 I focused longest perhaps on “Mostar,” Biscevic’s evisceratingly propulsive memorial to the 16th-century Ottoman stone bridge of Mostar, a city some 85 miles southwest of Sarajevo.  Destroyed during the war and rebuilt in 2004, the bridge, spanning the sparkling green Neretva River, is a familiar symbol of Bosnian loss and hope.  Biscevic’s rendition is singular, however, in its revelatory abstraction.  Color, texture, and motion combine to convey the feel of Mostar, stiflingly arid, viciously divided, quietly arresting.

Biscevic’s intimacy with paradox and contrast is hard-won.  Before the war, as a student at the University of Sarajevo’s Academy of Fine Arts, he prized dispassion, attempting to achieve ultimate stylistic precision and control.  The three-year siege of Sarajevo, however, left Biscevic preoccupied only with survival.  His revolution of consciousness would have a radical effect on his art, making emotional detachment impossible.  “The collapse of existing values,” he writes, “filled me with the desire to express visually the existential conflict of man.”  Once suspicious of emotion, Biscevic would now try desperately to capture its essence.

The shift occurred largely after Biscevic became one of the roughly 2 million Bosnians displaced by the war.  He fled to the United States, and there he encountered fellow refugees with almost incapacitating tales of suffering.  In a protracted state of shock, Biscevic made a conscious, courageous attempt to come to grips with the war’s awful reality.  He continued to seek out eyewitness testimonies, amass photographs of the war’s destruction, and pore over the court transcripts emanating from The Hague.  In danger of being overwhelmed, he welcomed uninhibited emotion and gesture into his artistic process.

The resulting intensity and soul of Biscevic’s paintings allow him to evoke and damn the war’s senselessness.  Somehow he avoids succumbing to nihilism. “My feelings, shaped by war, are expressed positively against the backdrop of destruction, brutality, and darkness,” he says.  “I paint to celebrate life and in protest of systematic violence and the horrific massacre of innocents.”  Juxtaposing beauty and tragedy, Biscevic presents the Bosnian psyche in all its polychromatic complexity.  Ravaged, Bosnians mourn, but freely, tenaciously they indulge in laughter, dance, and the feast.  Biscevic’s art is thus more than catharsis, more than a requiem.  It is the ongoing resistance of the exiled, tenderly distilled into a post-nightmare embrace.

The work of Biscevic is perhaps best understood, therefore, as a gift.  Honoring both our common humanity and our inescapable subjectivity, Biscevic limits us only, it seems, by insisting that we draw parallels.  He reminds us of the painful truth that “at this very moment, people in other parts of the world are carrying out, or plotting, the same atrocities.”  This is Biscevic’s ethical, activist imperative: we must recognize that Bosnia’s loss is our loss.  We are all in the diaspora, and we must now decide what it means to be human in an age of genocides.

For questions about available work, commissions, collaborations,  or any other inquiry you may have send me a message using this form or email  me.